As those of you who read the last newsletter would know, I promised a couple blog posts on the New Things I’ve been doing this year (if you’d like to get the newsletter, sign up here!).

Today I’ll touch on one of the subjects that has given me considerably more trouble this year than last year: editing. 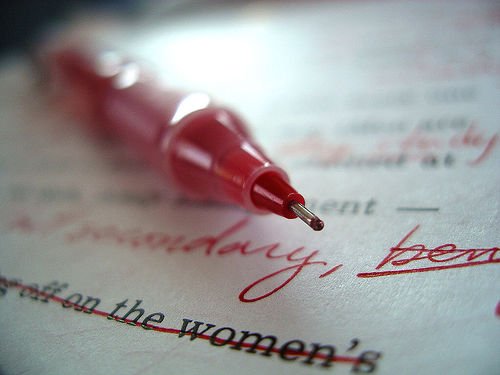 Memory’s Hostage, my first novel, was written over almost two years, in pockets of time stolen from a full-time job and full social life in Washington, DC.

By contrast, my second novel, Dulci’s Legacy (working title), was written in 30 days, for my first NaNoWriMo effort. I wasn’t sure what difference this would make, but since the editing process has taken so much longer, I’m going to blame part of that on the NaNo time frame, and part of it on the difficult structure I chose.

You see, for Dulci, I chose a contemporary setting, but introduced elements of the past that affect the present. It took me a while to sort out the intertwinings of time in my head, so it’s taken even longer to sort out on the page!

Someone else’s brave depiction of their intertwining storylines

There are many low-cost tools available to an independent writer for editing, of which two are a freelance editor, and a robust critique group. I have sampled a couple of the latter, but haven’t joined any one yet (hopefully that will take root this summer).

However, I did make the decision in June to hire a professional editor to help me sort out the structural problems I could see but not fix in the plot. Having met Lauren Sweet at a publishing talk at Annie Bloom’s (which has the friendliest bibliophile cat), I decided she’d be a good fit, and so far, we’ve had a really great back-and-forth discussion of story elements, writing styles, character divination, and juicy plot twists! 🙂

I read a lot on the editing process, both self-editing and professional editing, before taking this step, as it cost money, so here I’ll lay out the most useful posts for those who’ve read this far: congrats!

My first find, this was useful for questions to guide my beta readers, as well as my own self-edits.

Anne Allen and Ruth Harris run a gutsy, no-holds-barred blog on writing, and have a lot of posts about the craft of writing fiction, of which this is a brilliant example.

K. M. Weiland is someone I more recently discovered, but she has some great articles about writing too- including publishing and online marketing tools.

I haven’t explored this site as much as the others, but this post was good for the layers of editing, and I see that the author also highlights the aspects of the writing life that you didn’t expect would be part and parcel, such as how to treat giveaway book requests. #nowyouknow

As a bonus, you can scroll back up and click on that red-pen photo for an article by Jane Friedman (whose “Smart Set” blog series is really AWESOME) on how to choose a freelance editor for your book, if you do decide to take the plunge.

I hope those are helpful to anyone struggling to wrap their heads around the editing process. Don’t worry— just have faith that after enough perseverance, your novel will be in much better shape to face the world!

Images via Jane Friedman and crissxross

Also, just for kicks, check out the actual definition of “running the gauntlet” — at least editing isn’t that bad!