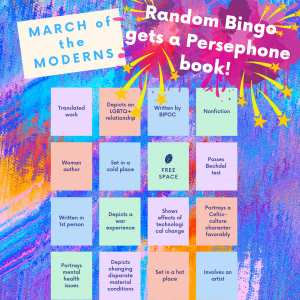 [TL;DR: I’ll be discussing these takeaways LIVE on my Youtube channel Fri 4/9 11amPDT]

Was it fun? Was it difficult? Were you successful? Did it help conquer Mount TBR?
What is a readathon???
OK, let’s define terms.
A readathon, like a marathon, is a long, grueling exercise in reading books.
Just kidding.
A readathon, like a walkathon, is a fun way to get people engaged in a semi-focused effort that will do them, and the world, some good.
There. That’s pretty close, anyway!
And what is success, in this case? It’s very important, when evaluating success, to decide on your measures of success. I had lots of possibilities to choose from:
Yes–lots of possibilities! And if I were more graphical-minded, I could even map these out into one score across all variables, but that’s going a little too far.
Sorry, grad school nerds.
So much for defining terms; what did I choose as primary measures?
The most basic measures for me were the ones I was already concentrating on for my channel: subscriber count, engagement in comments, and views. Let’s see how my process went before I reveal the results.
A readathon, like a walkathon, requires some planning. So far, so good. I LOVE a plan. There’s deciding what you’d like to offer, deciding how to get out the word, deciding how to communicate with participants, and deciding how to showcase content, among other things. (I’m not so gung-ho with deciding–but I conquered it, yo!)
Youtube is actually a tricky platform for some of these because it doesn’t have a way to message people, requiring a supplementary platform for that.

What do readathons typically offer?

I decided to go with a Bingo board. This meant a series of prompts that readers could mark off depending on the books they chose to read as part of the challenge. I chose prompts I’d seen elsewhere to encourage diverse reading, as well as some I expected to find in the target reading: changing material circumstances, war experiences, Celtic culture characters, etc. I didn’t trouble too much about how to place them, but I suspect thinking more about it would have been gaming the board, so I’m satisfied with how I slapped them onto a 4×4 board.

How to get out the word?

For Youtube, I found that the channel Little Book Owl had made her name by cataloguing all the readathons throughout the year on a website calendar and linking all the rules (there are hundreds). So I made sure to get on that two months in advance, which required an announcement video and central place for rules and information. I made this blog serve as the central place and posted more than usual for that purpose.
To coordinate reading together, I set up a Google doc with all the possible books I had for people to use as a jumping-off point (people were inordinately impressed with this 🤷🏽‍♀️). Almost all my buddy reads were from my owned TBR, except for one. In that case, Rainer posed the question in his video, ‘Doesn’t anyone want to read this E.M. Forster classic?’ So I said yes, I’d read it with him, and had to check it out from the library. 😝

How to communicate with participants?

Here is where it got a little tricky. I had over a dozen people participating with different books, and they all had different platform preferences. Rather than try to force behavior change (ha, good luck with that), I determined a different common platform for each reading group. Some were on Instagram, some on Twitter, some on Voxer, etc.

What would be the end result of the reading? I wish I had more creative ideas for this, but it was, after all, a challenge on Youtube, so we defaulted to live discussions of the books we read together on my channel, as no one wanted to host their own.
These were really fun! Each one had to be scheduled with the readers and spaced out on my calendar for optimal viewing pace, then scheduled in advance on Streamyard, with a description and a custom graphic, made on Canva.

Did I keep up with my plan?

SPOILER: I did! (not too surprising, if you know me)
To recap: I had a Google doc to arrange buddy reads (7 of which involved me, 1 of which did not) plus show who was reading individually for the readathon (5 additional people). Then I had a Bingo game board for individual use in checking off challenges (and a prize for a randomly chosen Bingo winner). And then behind the scenes, I had a calendar graphic to help me remember the schedule of all the live discussions and when I had to read what with whom. I shared this with people too, but I’m sure no one looked at it as often as I did! 😋

Subscriber Count: the first half of the month was discouraging, with a drop of 6 in one day, which Youtube seems to like to do. But the second half of the month picked up considerably, with a one-day add high of 7, and a net positive of 31. A little better than my recent monthly averages.
Views: I spoiled the sample for this, unfortunately, by including my BookTube Newbie Tag video toward the end of March. Eyeballing it, when that spike is taken out, it looks pretty similar to the two previous months, however.
Engagement: an interesting question arose for this factor. I’ve been considering comments as the chief engagement indicator, and been doing very well by it. However, Youtube’s chief indicator for ‘engagement’ is actually watch time, something I had not been playing as close attention to, being more opaque. But my watch time went up by 32% over the last mont–hurrah! I’m not sure if this is due more to the readathon or to the format shift of having primarily live videos rather than recorded (if you’re watching live, you can’t fast-forward). Seeing how well the two productivity sprints did, I suspect that the latter was the bigger driver.
So what can I recommend to others to use when planning a readathon?
And what would I have changed to have a bigger impact?
I had one experiment which I’d like to try again: premiering a video then following it up with live discussion. It’s kind of like showing your own movie then being there for a talkback. It worked well in this instance, but I’m not sure it’s replicable. To try again!
Here’s to planning out those big ideas! 🍾
If you’ve got questions, I’ll be going live here to discuss my takeaways from this readathon-running experience:

Hope to see some of you there! 🤓